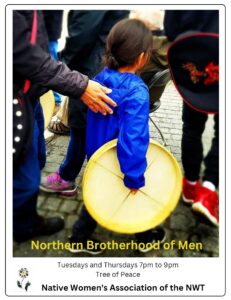 The Native Women’s Association of the Northwest Territories engages in fierce advocacy and healing programming for Missing and Murdered Indigenous Women and Girls. As an organization, we recognize that to make a deep impact in our communities; we must take a holistic approach involving men and women. That is where we believe the Northern Brotherhood of Men will play a vital role in bringing healing to our families and communities.

Violence against Indigenous women in Canada is an ongoing crisis deep-rooted in the nation’s colonial history. Despite numerous policies and programs developed to address the issue, Indigenous women continue to be targeted for violence at disproportionate rates.

The Northern Brotherhood of Men is a new program from the Native Women’s Association of the NWT and is a community-based grassroots movement raising awareness and offering practical support. Men are stronger when they stand together, building a renewed relationship based on recognizing rights, respect, and partnership. Changing policies will never be enough if we do not also change hearts and minds. We acknowledge that in the true spirit of reconciliation and growing stronger, healthier communities that respect and value women as sacred, Men have a responsibility to become change-makers in their homes and communities.

The Northern Brotherhood of Men is a men’s group that will meet on Tuesdays and Thursdays and will meet at the Friendship Centre. The group will be facilitated by Johnny Ongahak and Cody Erasmus, both counselors.

The Northern Brotherhood of Men is open to all Indigenous men and other men without distinction of any kind, such as race, language, religion, political or other opinions, property, birth, sexual orientation, or other status or identity. We collaborate with other men based on our shared values of compassion, love, justice and mercy. This group will have speakers and events that help men be more supportive of women and who will also become allies in fighting violence against women. Take action against violence when you see it and when you can oppose it. Speak up when you hear violent or oppressive language or comments. Learn about myths and bust them when someone is speaking to them or when something is promoting them.

Through the program, men will learn to talk to and learn with other men, find a way to ensure that their own learning continues while also sharing the knowledge they have or gain and contribute to shifting and changing the culture of violence that exists. We desire to see men empowered not only talk the talk about ending violence against women but also walk the walk and discover meaningful ways for men to contribute to ending violence against women.

There is incredible potential for men to become more positive roles for men and boys play than perpetrators or potential perpetrators of gender-based violence. These roles not only prevent and reduce violence against women but also improve the lives of men and boys by freeing them from these harmful and limiting aspects of masculinity. As a result, we can eliminate gender inequalities that hold back the development of our communities, territories and nation and ensure that women and girls men care about do not have to live a life in fear of violence.

Archives
Categories
Meta
Feel free to contact us. All inquiries will be directed by our admin assistant, but if you're looking for a certain program or staff member , please use the link below to navigate to the full staff contact directory page, or use the search bar provided below to narrow your search results quicker.
Get In Touch
Back To Top
×