Today we come together to grieve and heal.”

The words of Native Women’s Association of the NWT’s Amanda Baton, sombre yet hopeful, opened up the yearly Sisters in Spirit event held Friday in Yellowknife.

The annual October acknowledgment of lives lost, created by the Native Women’s Association of Canada, saw women ⁠— survivors of abuse and relatives of victims of violence — come together to share their stories of suffering and salvat

Rachel Tambour-Zoe pictured with a gift she received from the Native Womens Association of the NWT. Tambour-Zoe, one of several women who spoke during the Sisters in Spirit gathering Friday, says she wants to protect her only granddaughter from the disproportionate violence faced by Indigenous people in Canada Oct. 11, 2019. Brendan Burke/NNSL photo.

ion; stories accompanied by a chorus of calls for change in the face of disproportionate violence across the country.

Rachel Tambour-Zoe was one of them.

Like many in the room, Tambour-Zoe — a member of the K’atl’odeeche First Nation — told attendees she’s been affected by what the authors of the MMIWG national inquiry’s final report called a “genocide” of Indigenous women and girls and LGBTQ last June.

In July 2018, Tambour-Zoe’s cousin Brittany Martel was found deceased on the side of a B.C. highway. Martel’s smiling face was one of several framed photos of missing and murdered Indigenous women displayed at the gathering Friday.

Just days ago, Tambour-Zoe said a woman she knew through family was found dead in Alberta. Police have ruled her death a homicide.

“Is that going to be another case that will be swept under the rug?” she asked.

Tambour-Zoe’s tears were met by more from the audience.

But she didn’t place blame on the RCMP or law enforcement. She said her “heart goes out to officers,” who try to tackle the violence Indigenous people experience daily.

Tambour-Zoe stood in front of the Tapestry of Hearts, a colourful quilt commemorating the lives of missing and murdered Indigenous people — the product of a dedicated group of women and men who each added their own touch to the tapestry at the Native Women’s Association of the NWT’s office.

Tambour-Zoe later told Yellowknifer it was important to speak at the event because the need to address and confront MMIWG has become “very critical.”

Tambour-Zoe, who “went through hell and back as a child,” said she wants to protect her only granddaughter from the things she endured as a young person. 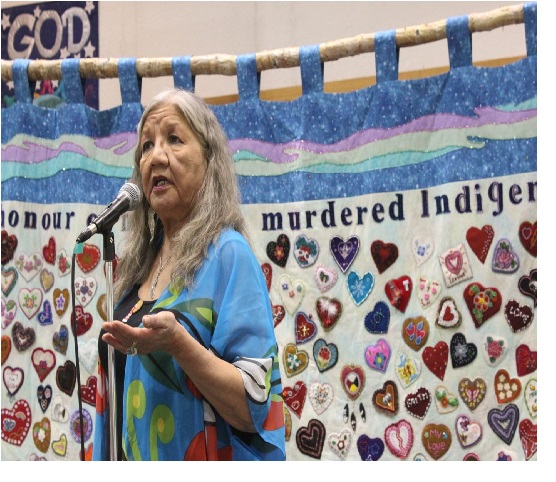 This is a mens issue as well, Gail Cyr told a crowd at Northern United Place. Bringing men into the conversation is necessary to make progress, said Cyr.
Brendan Burke/NNSL photo. Oct. 11, 2019.

By including men, law enforcement and government agencies in the conversation, progress can be made, she said, calling for strengthened partnerships between Indigenous groups and those agencies. 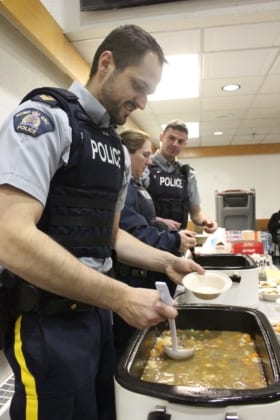 Yellowknife’s top Mountie, Insp. Alex Laporte, said it was important for RCMP members to attend the ceremony for a number of reasons, the first being to honour the lives of the missing and murdered.

“Also, for us as a service provider, it’s important for us to come here and show our support and hear the stories – for people to to see that we’re here, we’re present, we do our best every day.”

“This is an ongoing commitment to relationships because we all have a role, and we work well together and we need to work together for those who are vulnerable and in need,” added Laporte